The 12th of May Hellingproof travelled all the way to Maastricht in the ‘far south’ of the Netherlands for the studentcup of Maastricht. The studentcup of Maastricht or better known as ‘de ronde van Wolder’ is always one of the hardest races of the year, because of its hilly track. However, with a name like Hellingproof we couldn’t ride unnoticed in a race like this ?. First of all, it was time for the men’s race without license. With a staggering number of thirteen riders, the Hellingproof colors were widespread throughout the peloton. Our hellingprof Bram started this race wearing the leaders jersey, so we started with the task of defending the leaders jersey. The race immediately kicked off explosively and this made it tough to keep up with peloton. Several riders already had to chase the peloton and couldn’t get back anymore during the first laps and this continued during the race. After a few laps a few riders escaped the bunch, including Bram and the Dutch champion Guus Schutte. This started out as a promising breakaway with a few strong riders. Sadly, a crash in the breakaway made it all disappear and Bram abandoned the race and he was not able anymore to defend the leaders jersey. On the bright side, he was not injured badly. With everyone back again in the bunch the pace was still kept high which made it difficult to escape the peloton. However, a few laps before the end of the race a couple of riders managed to escape the peloton including Jesper! This breakaway managed to stay away till the end of the race and they sprinted for the win. Jesper sprinted to a 5th place which he can be proud of! The riders in the depleted peloton still sprinted for a spot in the top 10. Three more Hellingprofs managed to sprint to a spot in the top 10. Robin, Alger and Max managed to sprint to the 8th, 9th and 10th place. Despite some bad luck during this race for our leader Bram, Hellingproof still did a descent job.

After the women’s race it was time for the last race of the day, the men with licence. With three Hellingprofs at the start, Jetze, Bas en Tjalle, Hellingproof had some strong riders at the start. However, hellingprof Jake who was in first place of the GC of the men with licence didn’t start this race due to obligations on the other side of the channel. This race also started with a crazy pace which made a tough race immediately. After just three laps Tjalle managed to escape the bunch with another rider. They formed a breakaway that managed to stay in front of the peloton with a gap that differed from lap to lap, sometimes it looked like they would be caught again but the peloton couldn’t close the gap. Tjalle felt very strong during this race and he almost always rode uphill in first place with a dazzling speed. Somewhere halfway in to race Jetze unfortunately got a flat and his race was over. With a few laps to go the other rider of the breakaway couldn’t keep up with Tjalle’s pace anymore. So, Tjalle was on his own for the last few laps. These last few laps were very exciting because the peloton got closer and closer to Tjalle, but it still looked like he would stay out in front till the end. Sadly, with crossing the finish line for the second last time Tjalle got caught by the bunch. Eventually the race ended in a peloton sprint, Bas started sprinting quite early but he couldn’t sprint to a spot on the podium. The last race of the day was an exciting one and it looked like to end well for Hellingproof, but not all dreams come true ?. However, we are proud of our riders and it was nice to see so many Hellingprofs racing! 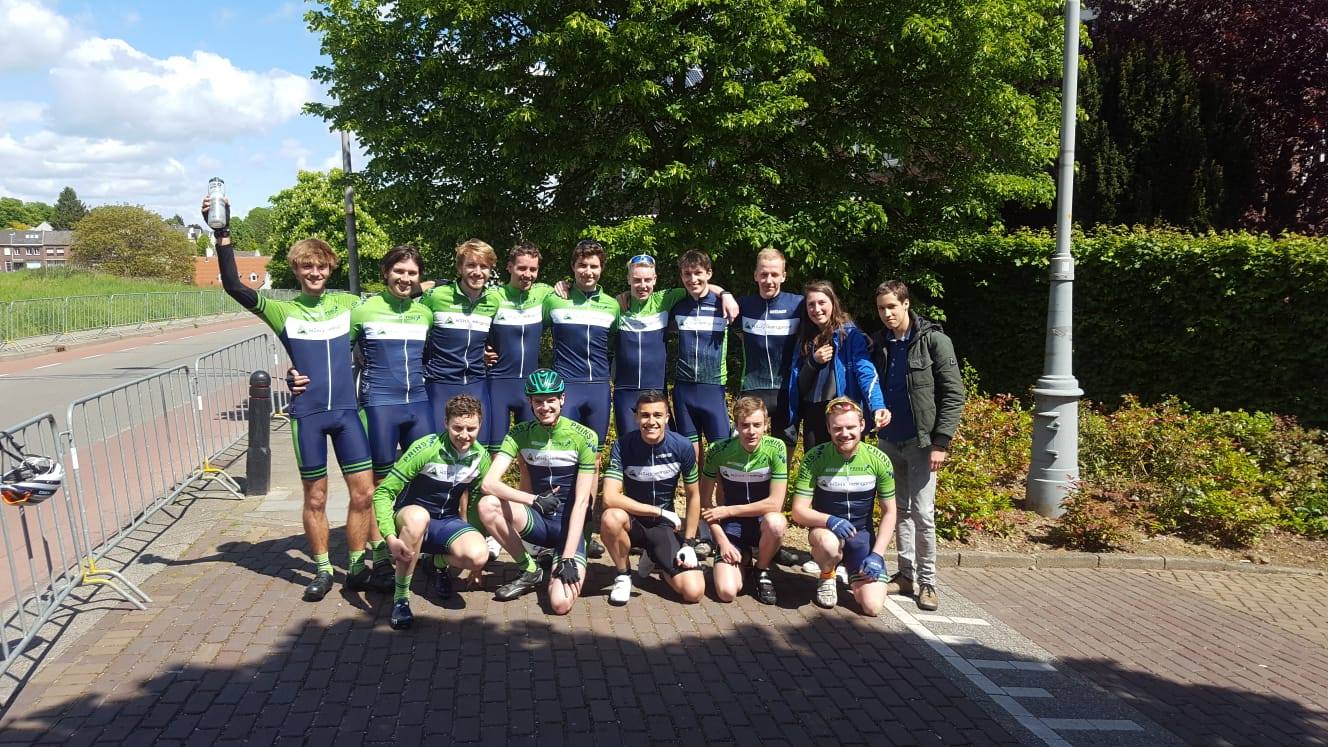