During Easter it was time for our yearly training weekend. This year it all took place in the Eifel in Germany. At Good Friday 19th of April, 27 Hellingprofs decided to join for this long weekend. Early in the morning Tjalle, Bart, Jesper, Jetze, Jake and Robin started cycling there to make sure they were already nicely warmed up for the rest of the weekend. 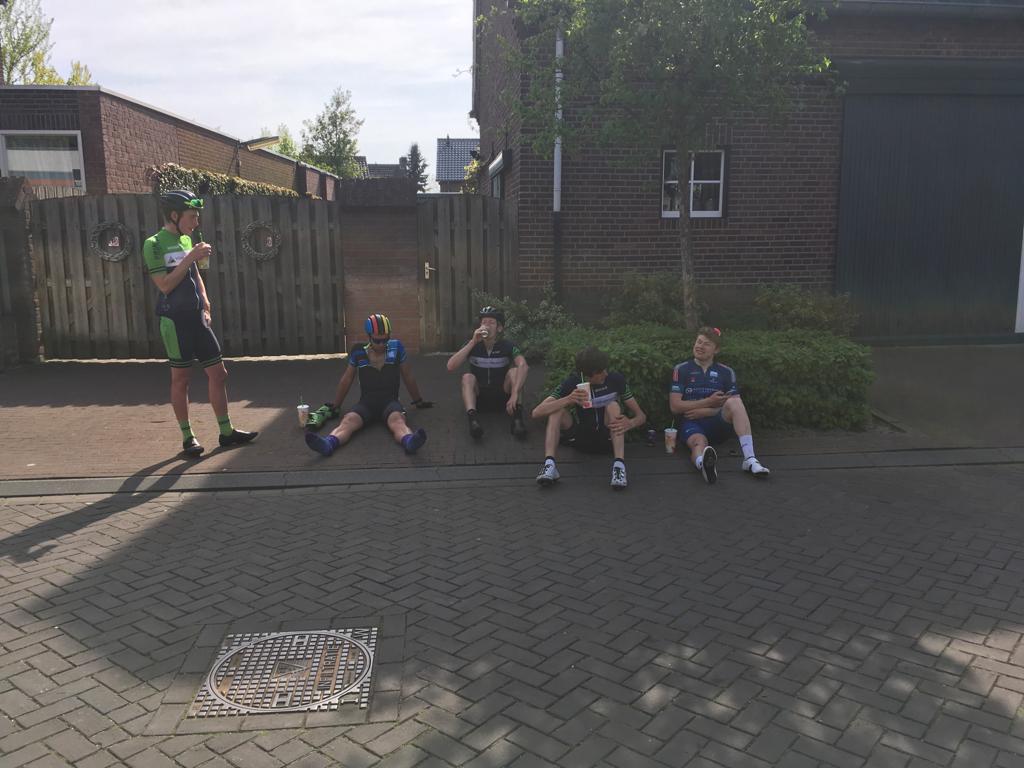 Tjalle, Bart, Jesper, Jetze an Jake having a drink during their warming up ride

All the others gathered in front of Hoevestein at 10.30 to pack the luggage, bicycles, and themselves in all the cars. Having arrived in the Eifel a few hours later, a nicely located and large house awaited the Hellingprofs! 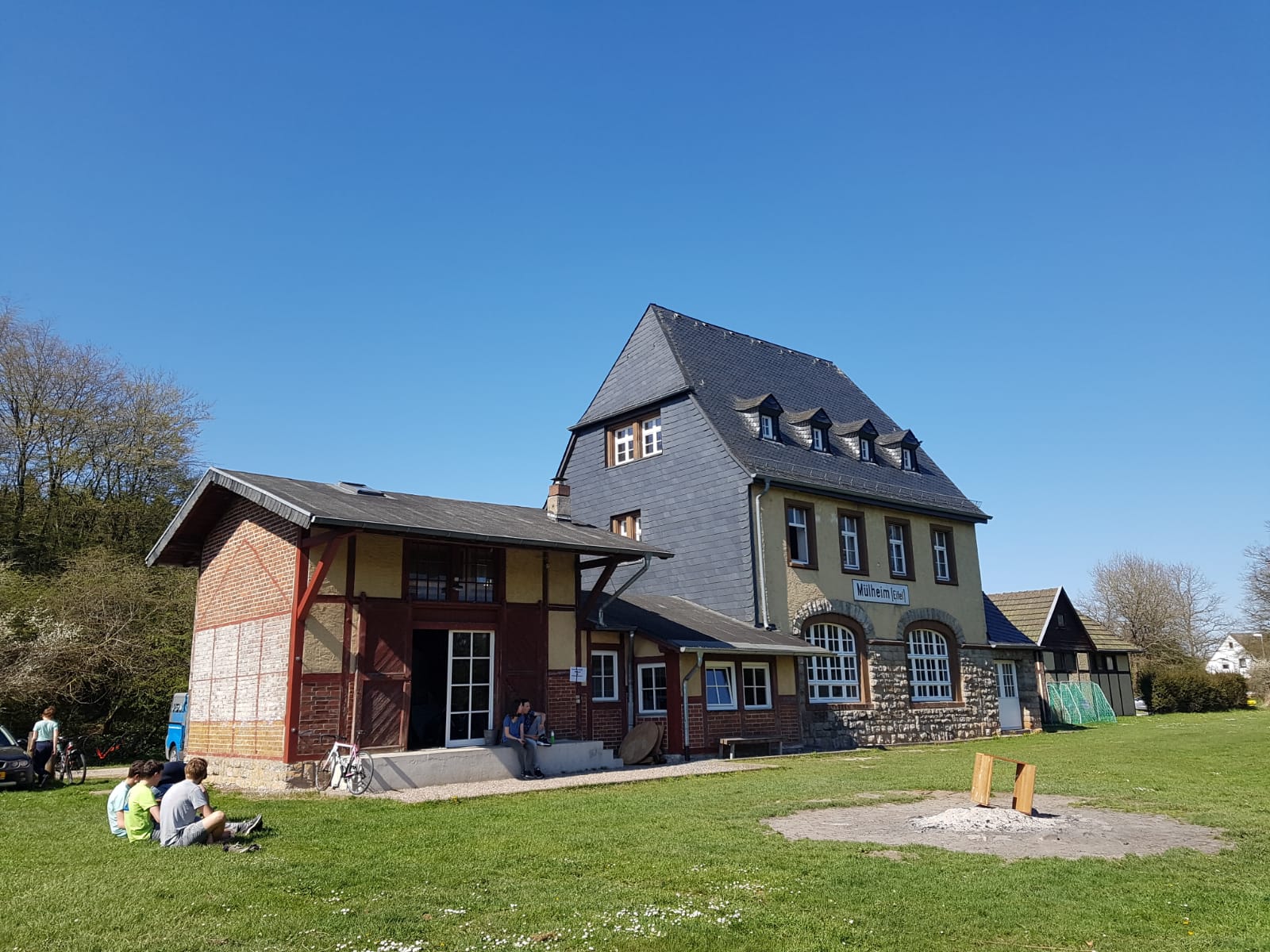 A nice sunny lunch in the garden

After a short lunch all the cyclists went for an exploration ride of about 60 km, and Susan and Olivier went for a ride on the MTB. It soon became clear that the climbers would be in their element this weekend because there were a lot of nice short but steep climbs in the surroundings. 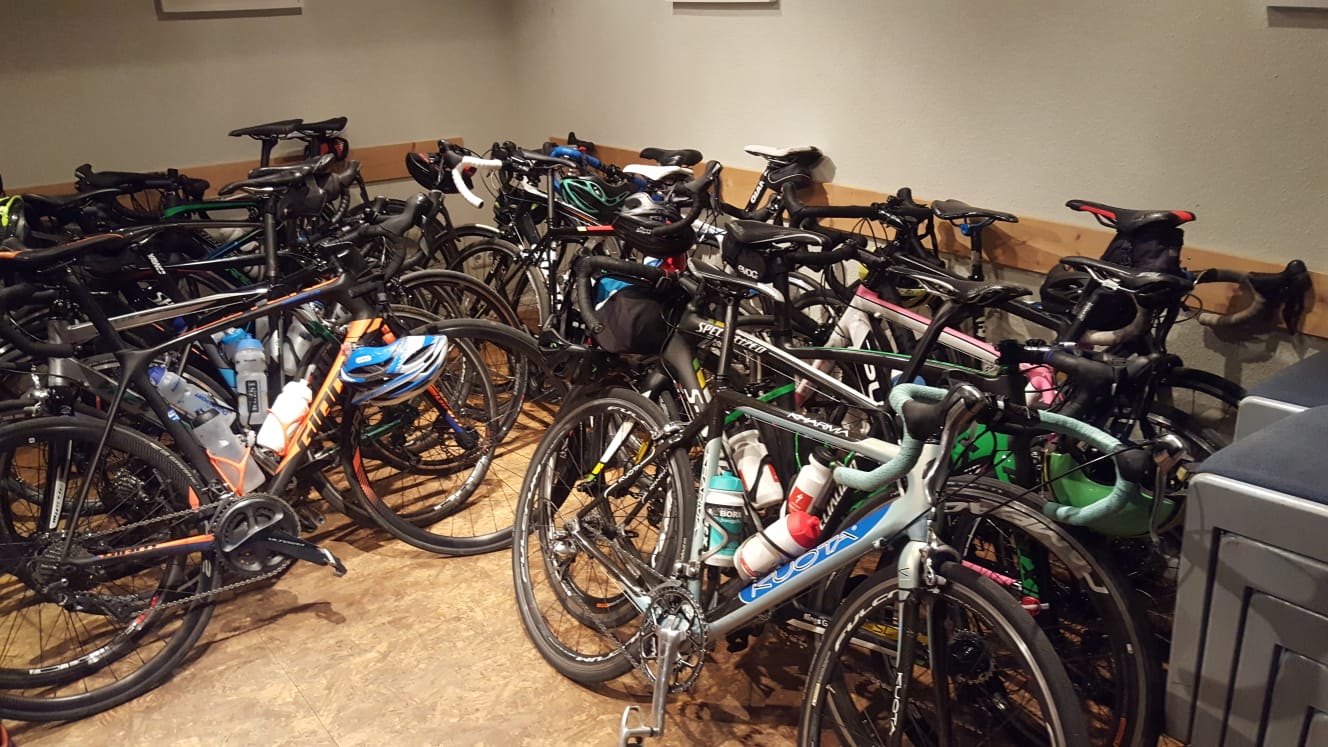 A room filled with beautiful bicycles

The next day everyone woke up early to make a nice 140 or 90 km ride with a lot of altitude meters. The weather was beautiful and some Hellingprofs even seemed to enjoy themselves so much that they started to look for some undiscovered paths. 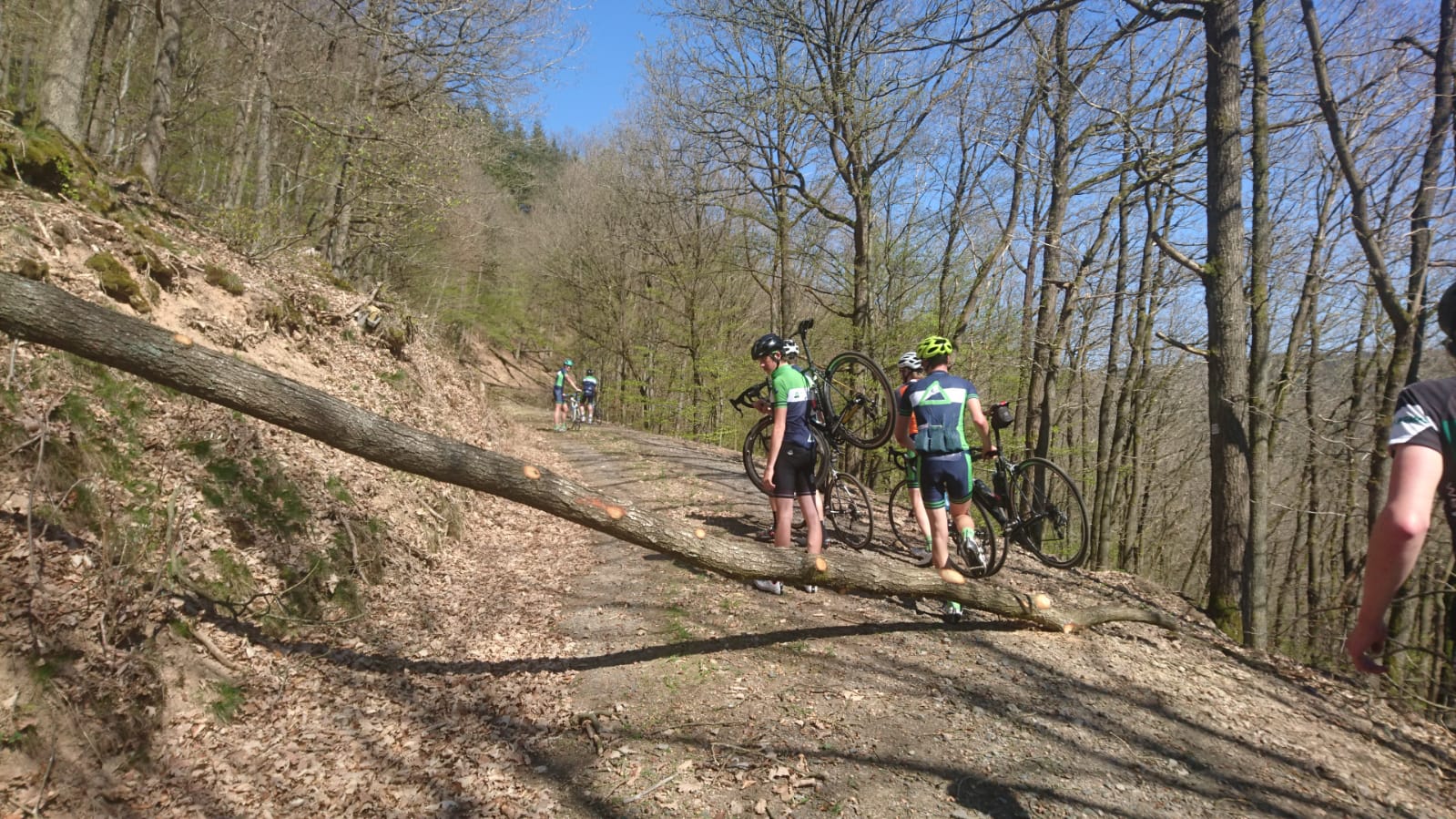 Or maybe there’s a reason these paths are still undiscovered

After the ride there was a run for the showers because there was only limited warm water. The last one’s to shower had a hard time because they had ice cold water. However Bas, who is used to showering at least half an hour, was smart enough to find out that he could warm up some water with the kettle to still have some quality showering time.

On Sunday there were a few groups riding different distances. There were again some off road paths taken followed by some punctures. However luckily without any fallen trees this time. The weather was again very nice so there was plenty of time to increase the enjoyment-of-life coefficient that day. 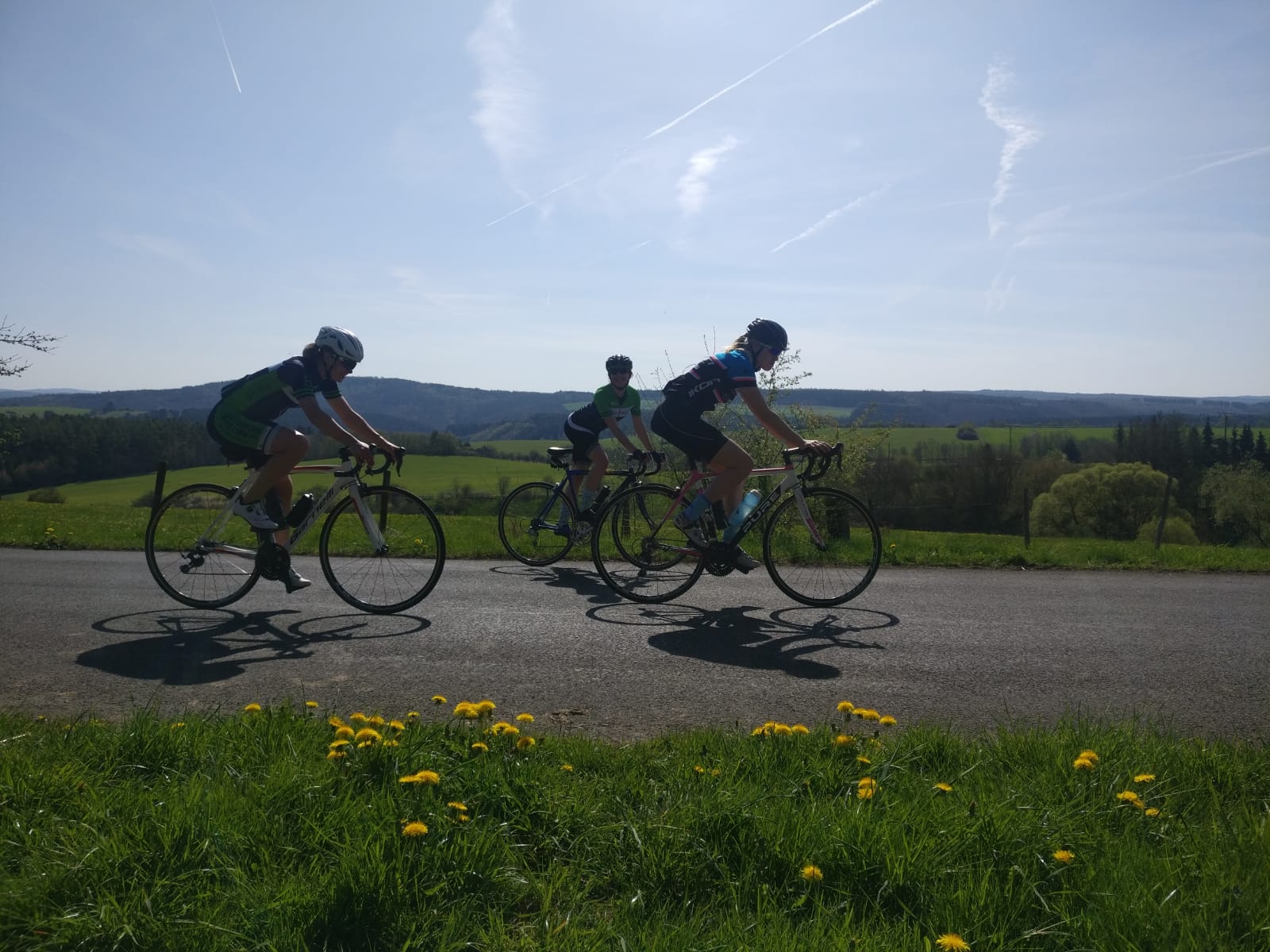 Hellingprofs out in the sun

Having returned to the house, the Amstel Gold Race was still on and the Hellingprofs gathered to watch the final during which Mathieu van der Poel managed to win impressively! In the evening there was a pubquiz with questions about German facts, geography, and music. In the last category about Hellingproof, the answers to the questions were the Hellingprofs themselves.

On Monday there was only time for a short ride, although there were again some nice off road paths (and its corresponding punctures). However a puncture is not that bad when being in the sun with a nice view on the German scenery. 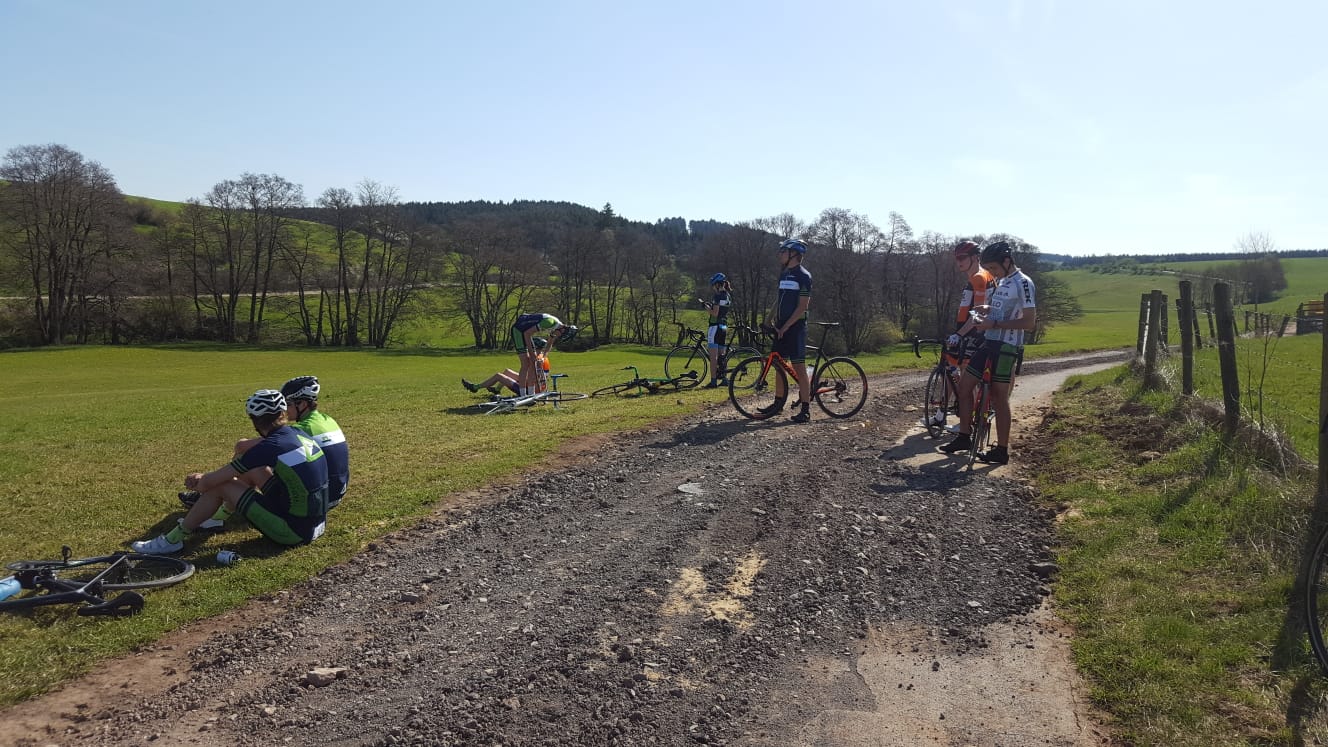 Tjalle, Bart, Jesper, Jetze, Jake and Filip went for a cooling down ride back to Wageningen while the others cleaned everything and went back to Wageningen by car. It was a very successful weekend and a very good start of the season!