February 3 on Sunday, 9 Hellingprofs woke up very early to start their training week in Spain. Job, Jeroen, Luuk and Tjalle had to come from distant places throughout the country and already left the safeguard of their beds in the middle of the night in order to arrive on time at Schiphol airport. Alger, Rik, Talis, Bas and Gijs travelled to Amsterdam a day earlier to crash a night at Bas’ parents place. 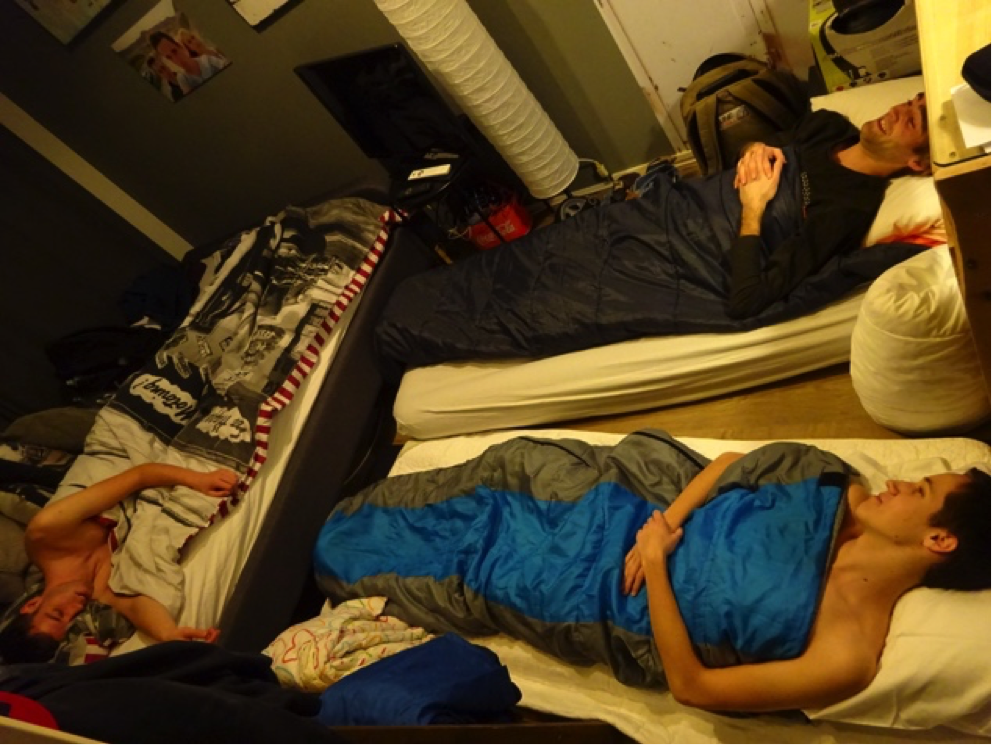 Talis, Rik and Gijs having absolutely no problems waking up early in the morning

Content with the hospitality of Bas’ parents (sorry about Alger who emptied most of your supplies miss Overdevest) but still in shock about the brutal farewell of Robèrt in ‘Who is the mole?’, these 5 Hellingprofs could have a good rest until 4.30 in the morning. At that time Luuk joined these 5 Hellingprofs, which makes 6 Hellingprofs, and they all walked to the bus stop where they were picked up by the bus. 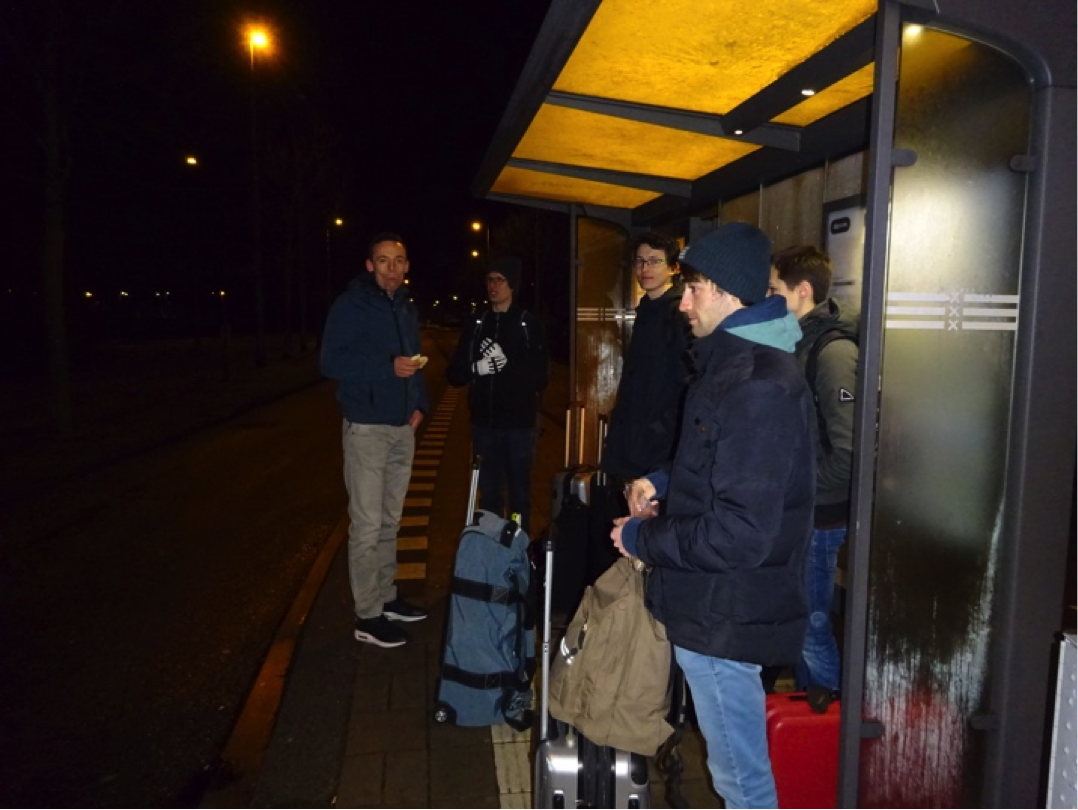 Waiting for the bus in the early morning in Amsterdam

Still half asleep, they were surprised, not only about how many ‘Amsterdammers’ woke up this early in the morning because the bus to the airport was very full, but also about how much of this story about their week in Spain is actually just about their voyage to the airport, which is probably significantly less interesting than the training week itself. Let’s therefore just skip the boring airplane-being-crammed-in-a-small-space-like-a-chicken part and go 1000 km to the south to the beautiful warm southern Spain. After reaching their hotel in Ronda, the Hellingprofs decided to do a nice ride of about 50 km to explore the area. Soon enough, they discovered that the temperatures in Spain were good enough to wear short clothes. However it was also important to integrate with the local Spaniards, and therefore they decided to all wear winter clothes. 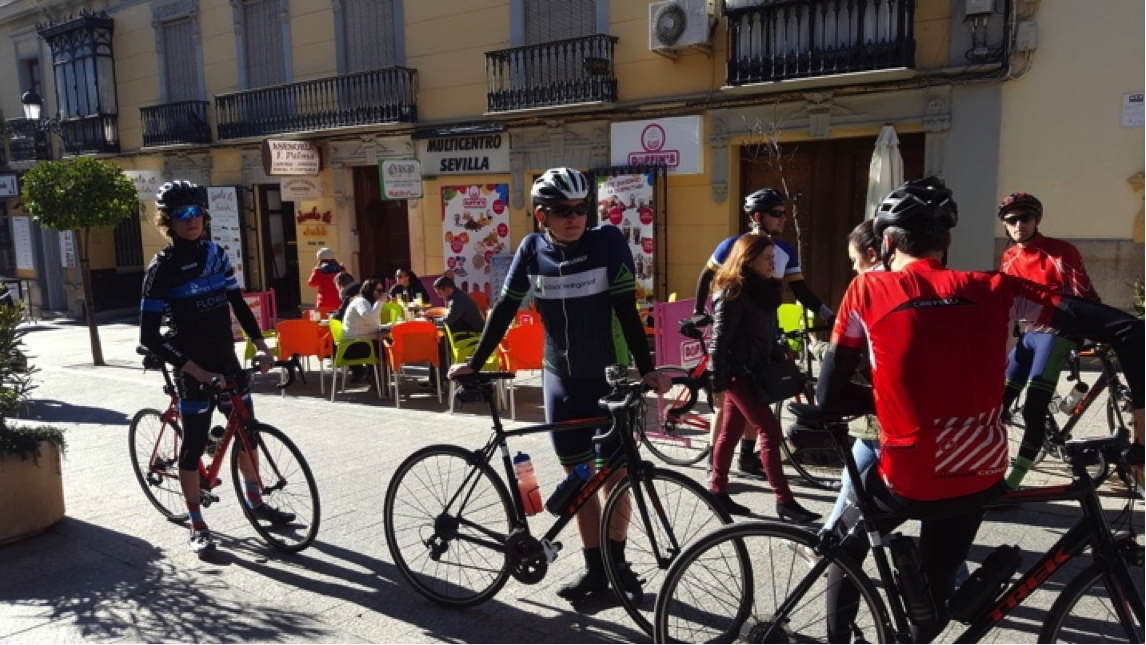 They were enjoying the sun and the nice views. All this enjoying lead to Tjalle’s already famous statement: “I’m pregnant of sunshine”. 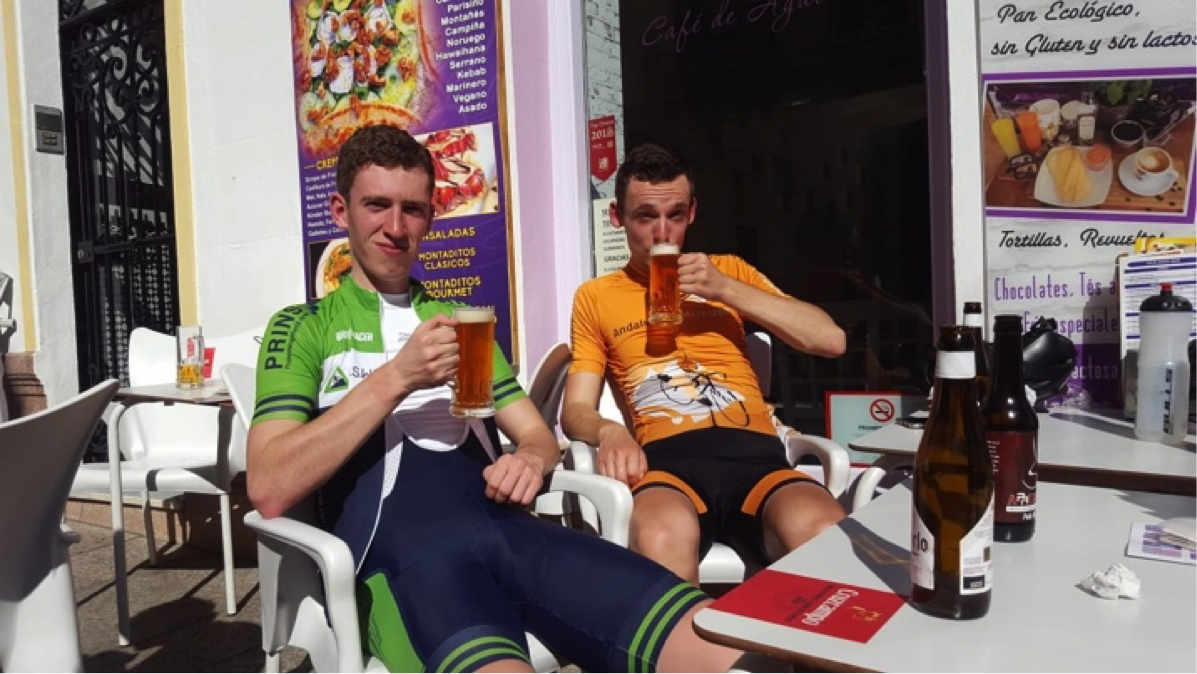 Tjalle and Bas being pregnant of sunshine (and beer)

In the evening a nice pasta meal was being prepared for them by Flavio, an Italian because the Hellingprofs already integrated enough with the Spaniards.

On Monday, the Hellingprofs had the opportunity to catch up a bit with their sleep. After everyone managed to get out of bed, they departed for a ride of about 85 km to Las Palomas. The nice thing about this ride was that there was a beautiful climb of 12 km called in it, called the Puerto de las Palomas. Tjalle, Bas, Alger, and Talis immediately went onto the attack from the first kilometre during this climb. However, Talis soon found out that the Tjalles immense power was too much and he went on in his own rhythm. Even Bas eventually had to let go of the back wheel of Tjalle. Alger was still very fresh but got a flat tire at an unfortunate moment and therefore Tjalle the beast arrived first at the top. Bas, Gijs (where did he come from?) and Talis arrived second, third and fourth. 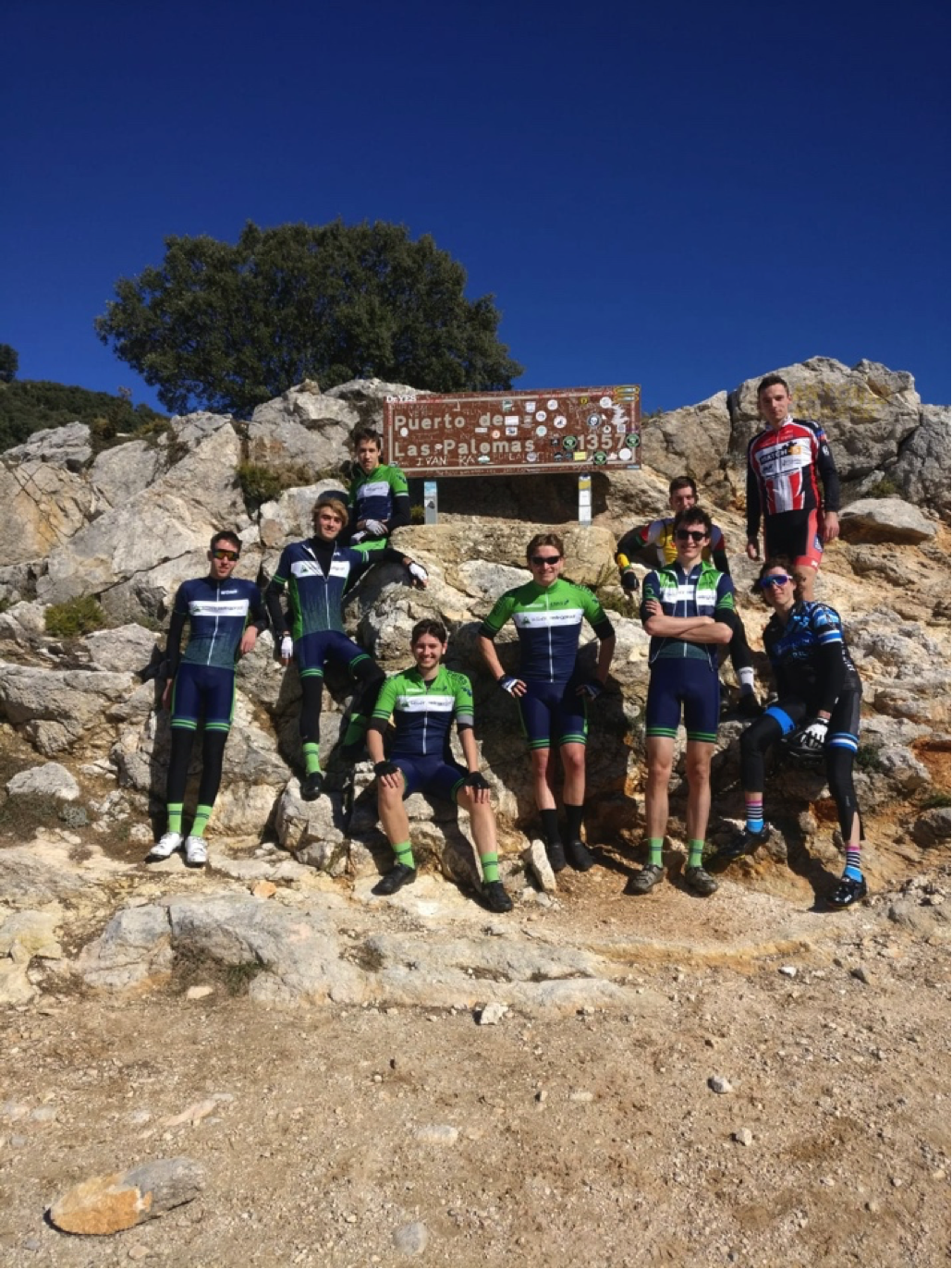 After almost falling asleep at a sunny terrace, the Hellingprofs descended back to Ronda. After dinner, there was still time for a nice drink at a local bar.

On Tuesday the weather was even better than the first two days! So a lot of Hellingprofs decided to forsake their intention of integrating with the Spaniards and went riding with shorts. Job and Rik went on a ride of about 60 km and other profs for a ride of 100 km. It didn’t last long before people also started riding without arm sleeves, which ensured that all the Spaniards walking by had a strange look on their face when seeing the profs. In a small town Bas made sure to organise a nice criterium with some steep parts and stairs, where everyone didn’t have a choice but to walk. 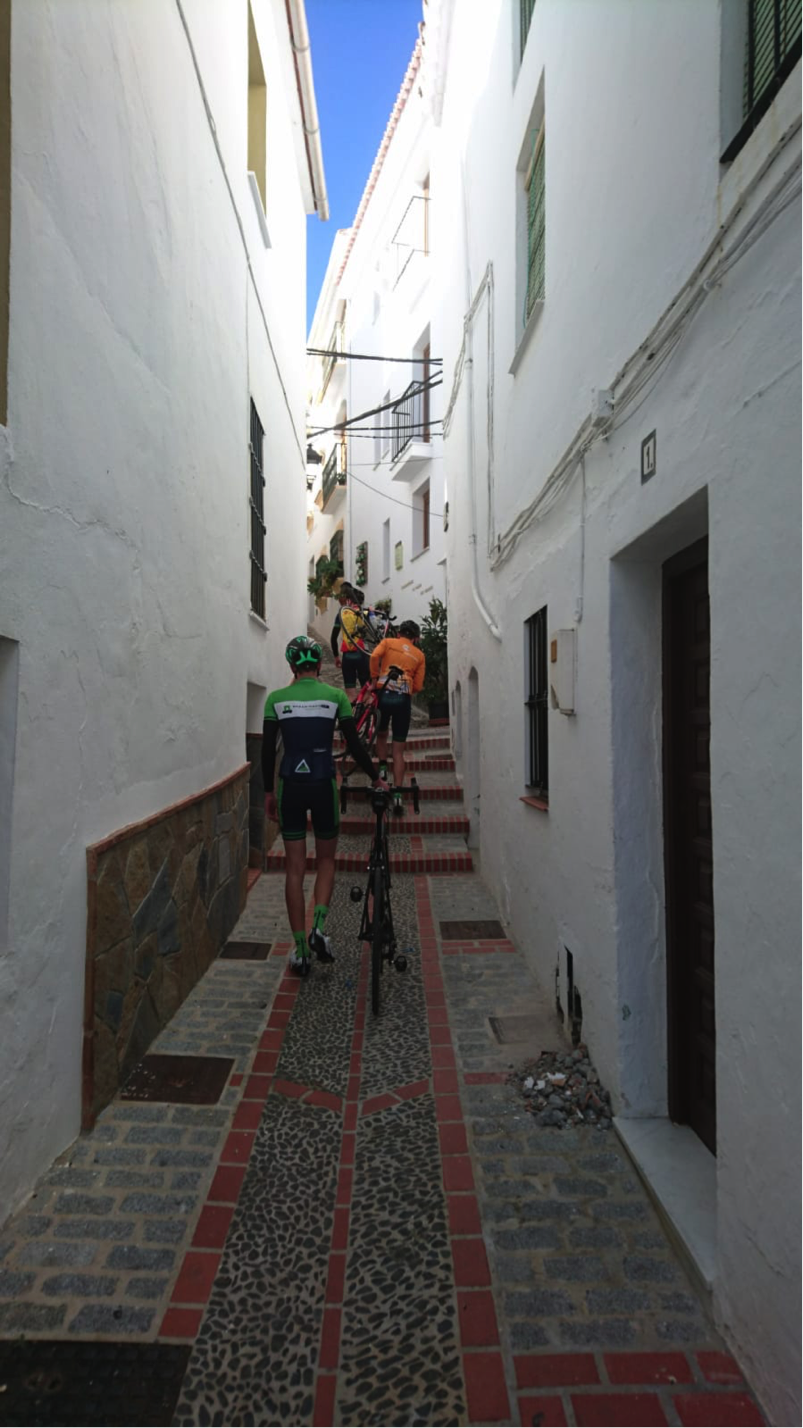 On Wednesday it was time for a rest day. A few Hellingprofs decided to still go for a short ride, however in a slow pace. This was possible until a 25% cobble stone climb that was apparently fun to ride. However most of the rest day was spent enjoying a drink in the sun, exploring the city of Ronda, or spending time in a not-further-to-be-mentioned fast-food restaurant with excellent burgers. 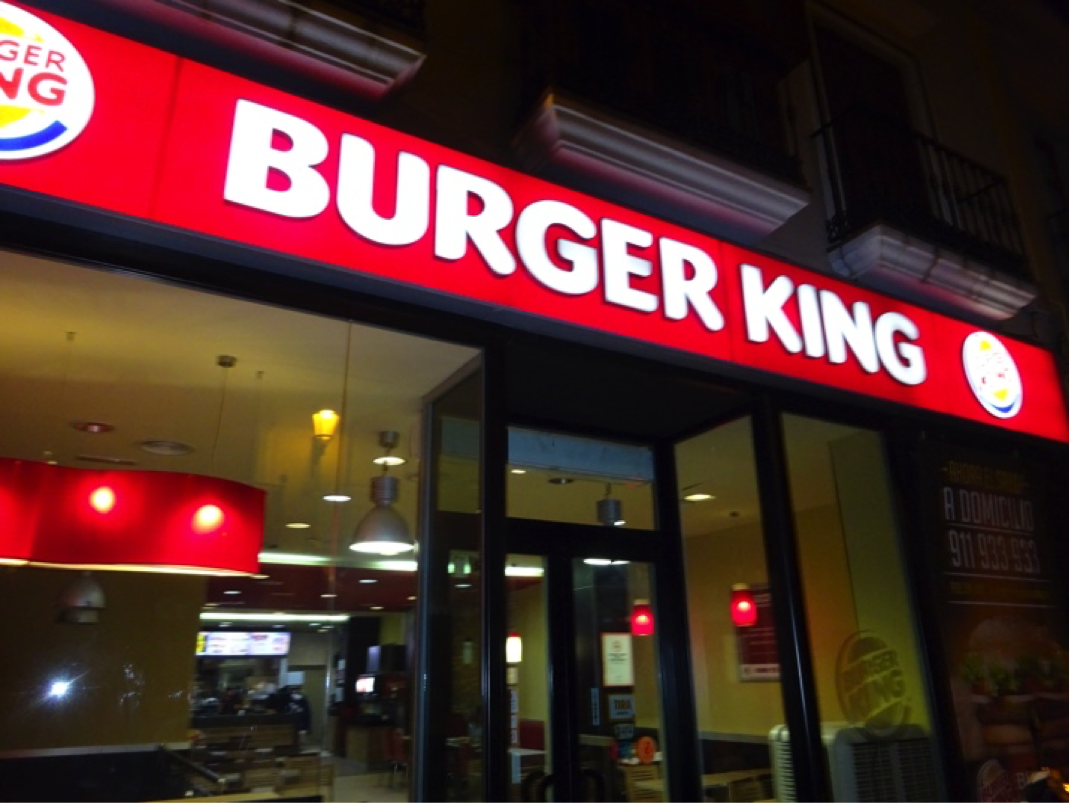 In the evening, it was time to watch El Clasico in the local Irish pub. Everyone was enjoying himself, (almost) professional swimmer Jeroen so much that he even started drinking beer! 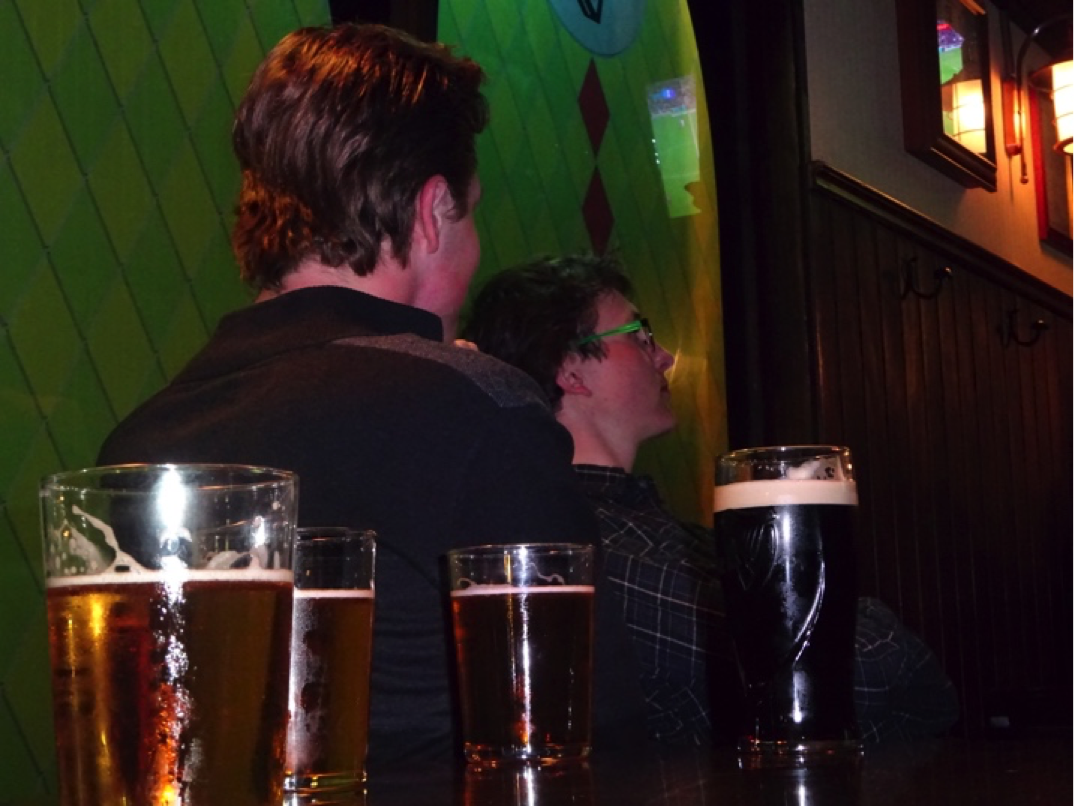 On Thursday most Hellingprofs were tired and didn’t want to climb anymore so they went for a (Spanish) flat round of 160 km. Bas and Tjalle however were still motivated enough to make a little detour to Las Palomas to try and beat their climbing time of the second day. But they were much slower than during the second day, probably because that had spent too much of there energy in the first days of the week. Job and Rik however decided to do a ride with some nice climbs. Job even managed to beat his climbing time to Las Palomas with several minutes. 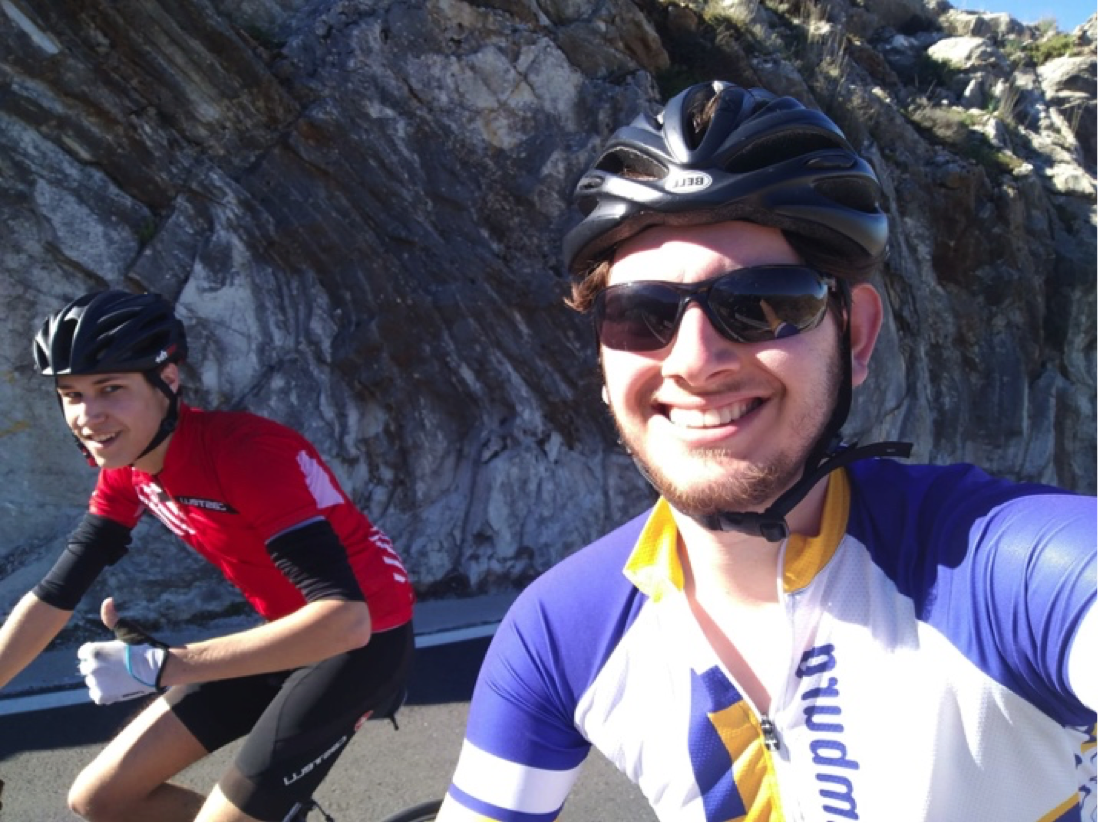 After all Hellingprofs were back into the hotel, everyone tried to eat all the burned calories. There were several good tactics to do this. For example, there was the Rik-method: eating chicken nuggets in that fastfood restaurant with the excellent burgers, then giving dinner to Jeroen or Alger to save space for another round at the Burgerking (oops… not sponsored). However there also was the Jeroen method: just eating everything! But the most effective method was from Tjalle: getting someone to feed yourself so that even calories are saved by not having the effort of moving your hands when taking in food. 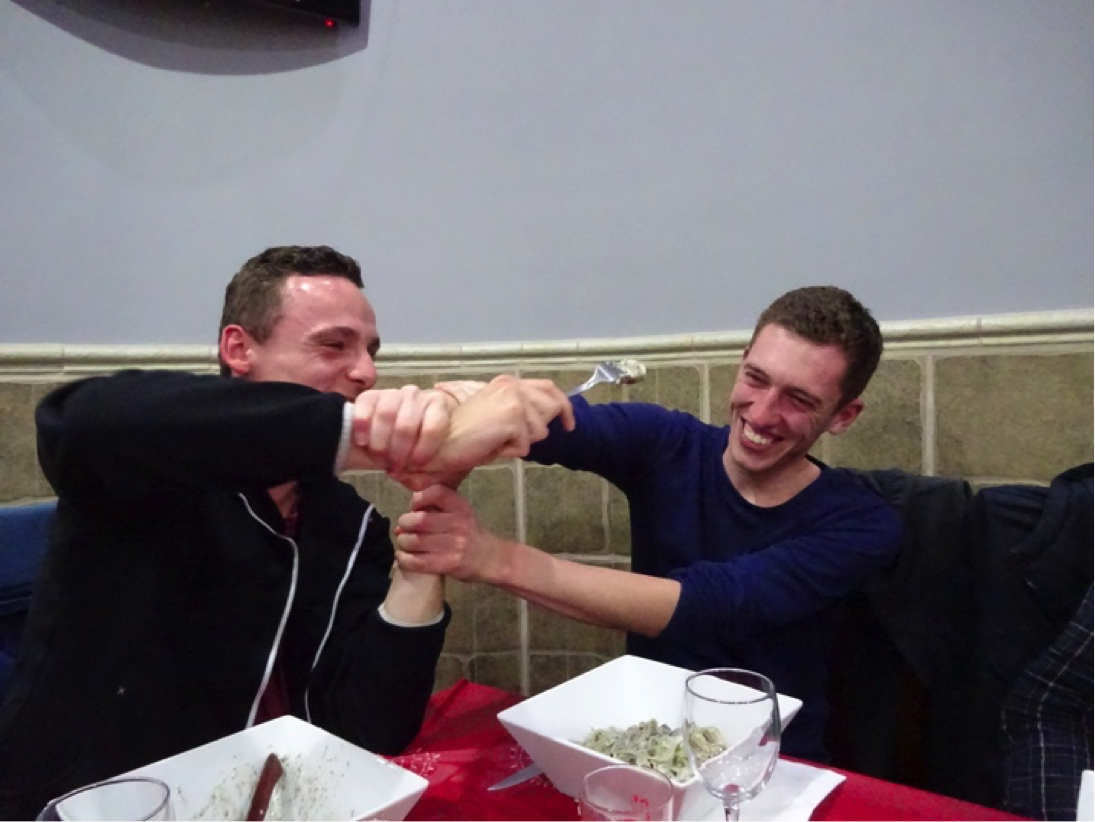 Tjalle playing it smart to save energy

On Friday, the last riding day of the week, all Hellingprofs together decided to make a ride of 90 km through a small Smurf village in which all the buildings were painted blue. There even was a statue of Big Smurf, and the Hellingprofs off course wanted a picture with this legendary TV icon. However, this peaceful picture moment was interrupted because rumours were going around in the village that there were Hellingprofs. Next moment, there was a line of hysterical local Hellingproof fans that wanted to go on a picture with the Hellingprofs. It has once more been proven that even in Spain Hellingprofs are very popular. 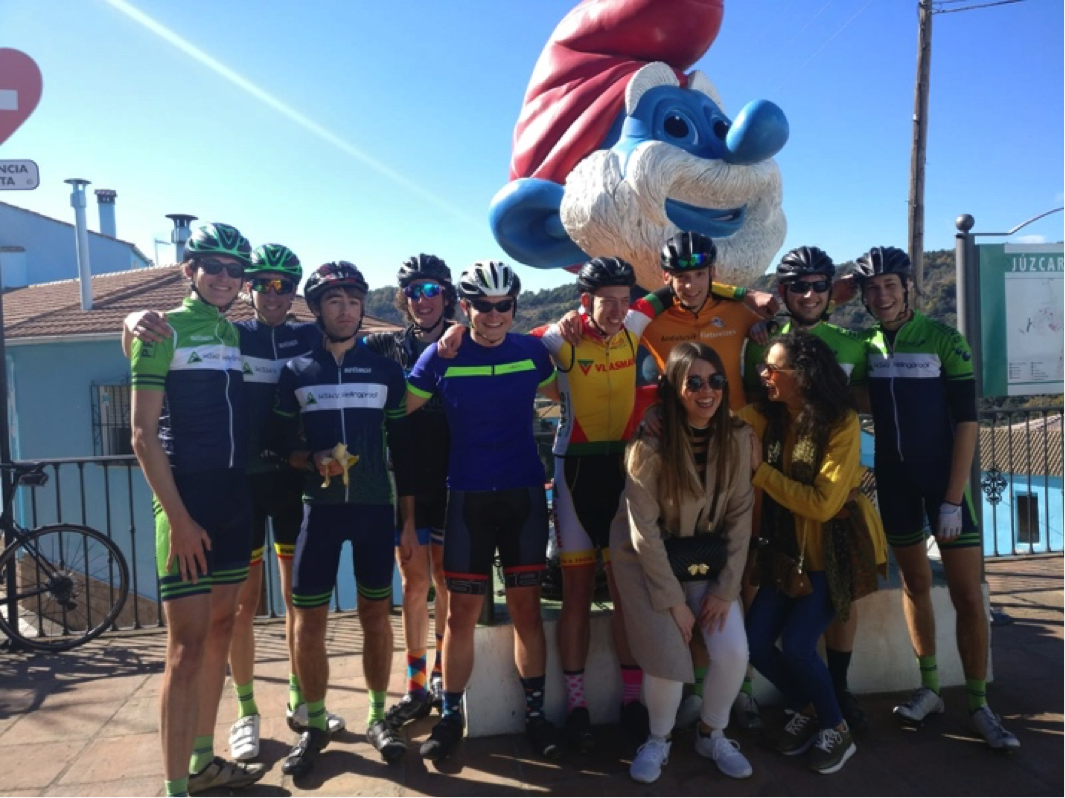 Saturday was unfortunately already our last day in Spain. However to make sure to recover well from the trainings, Bas had arranged a luxurious flight back to Holland. Overall, our second ever training week in Spain was again a successful one (this time luckily without any knee injuries), which had given the Hellingprofs a nice preparation for coming year!