On Sunday 21 May the round of Wolder was held. There was nearly no flat piece in the lap of 3.5 km. Every lap we had to climb the Louwberg. We had to get up early to be on time in Maastricht. 8:15 AM we left to the sunny south of the Netherlands together with 5 Hellingprofs. In the train it was quite busy with other bikers, and at one time there were even 9 bikes in the bicycle coupé. After a long journey we arrived in Maastricht, just in time for the start of the Linda who participated in the fun class. She was the only women in the race, but she cycled very strong! Soon a leading group was formed, and of course Linda was part of it, together with 3 man. After a few rounds one of the man got a flat tire, and the leading group continued with 3. Supporters were very surprised that there was a woman in the leading group. ‘Who is that woman? That’s not a woman, it’s a machine’. The organisation had to search quickly for a Mister instead of a Miss. At the last climb of the race one of the man in the leading group escaped, won the race. Just after him Linda and a man from Dutch Mountains finished in a close sprint with only a few mm difference. Linda became third in the race, which is a very good performance!

After Linda it was the turn of the man without licence. Hellingprofs participating in this race were Bart, Martijn, Alger, Bram and Onno. Today the teams from DM and Mercurius were with many people. Due to problems with his gear Martijn had to left the race because of 4 minutes distance on the peloton, but he rode very strong. 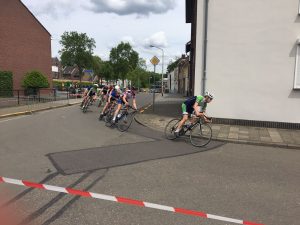 Bart showed that he can not only sprint, but also climb. He became second in the final sprint and thereby got the third place. The gap in the final rankings behind Bart and number 2 is even bigger than it was. Bram finished just behind Bart in the peloton and became 7th. Alger finished on the 12th place, and Onno, who rode his first race ever, became 21th. 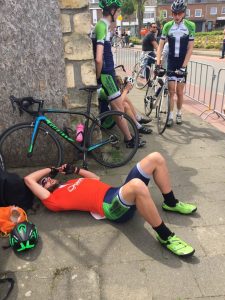 Bart is tired after his race

Next race it was Susan’s turn to represent Hellingproof. She was the only Hellingproof girl, against a team of 7 from Dutch Mountains, 5 from Mercurius and Teuntje Beekhuis from Squadra Veloce. Teamtactics were made before the race, and therefore the first lap was easy, to hold the teams together as long as possible. Susan attacked a few times to break up the teams. In the final climb a girl from Dutch Mountains attacked. Susan followed, and directly passed her and on her own she drove the last kilometre to the finish line and won the race. With that the leading jersey is a bit tighter around her shoulders. 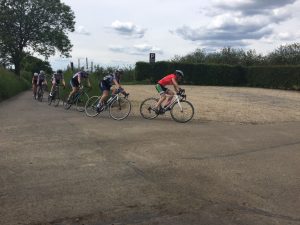 Susan is leading the peloton as the strongest girl

In the category man with a licence Gijs and Tjalle were the only riders from Hellingproof. The race started very fast, but Gijs en Tjalle are good climbers and could follow the peloton for more than 30 minutes. At the end the speed of the peloton became too high, and first Gijs had to left the race and after that Tjalle got cramps on the Louwberg and had to stop his race.

All in all is was a successful, and nice day for Hellingproof in Wolder, with 3 podium places and 2 leading jerseys. 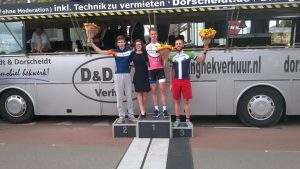 Bart on the podium 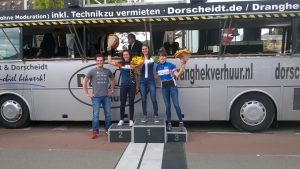